Post Views: 1,110
Elias Chipimo Jr. (born September 1965) is a Zambian politician and the president of the National Restoration Party. He 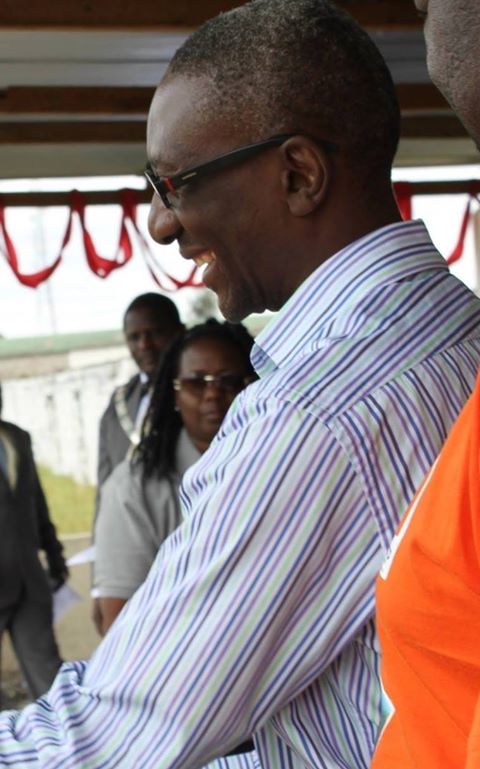 previously worked as a corporate lawyer and human rights activist.[1]

Personal History
Chipimo is the third boy in a family of seven. He grew up in Lusaka, but also lived in the United Kingdom, where his father served as a diplomat in the late 1960s.
Chipimo’s father (and namesake) made a speech to the Law Association of Zambia in 1980 which marked the start of his confrontation with the leadership of the ruling UNIP led by Kenneth Kaunda.
Professional career
Chipimo, a Rhodes Scholar, graduated from Oxford with the Bachelor of Civil Law in 1990.[2] Before going into politics, Chipimo was Managing Partner and Senior partner, responsible for corporate advisory work, mergers, acquisitions, investments and privatisations.
His main area of work is corporate law, principally advisory work on mergers and acquisitions, privatisation and capital markets related work in Zambia as well as within the Southern African region.[3]
Philosophy
Chipimo in 2010 established the National Restoration Party (Www.newzambia.org)a political party that aims to encourage every Zambian to take more of a measure of responsibility and better manage the five important areas that underpin personal responsibility: managing time; living up to our commitments; vision and planning; fact-based rather than emotional driven decision-making; greater independence in thought and action. Chipimo has published a book based on his opinion of the leadership in Zambia and the current state of the nation.
The book, titled “Unequal to the Task?”, is available in bookstores around Zambia and also available online at www.newzambia.org.

Unequal to the Task? By Elias C. Chipimo Jr (A Review)

By Marja Hinfelaar
‘Even if we are not actively negligent, greedy or corrupt, in so far as we turn a blind eye to the manifestation of these ills in our midst, we become a part of the self-defeating mediocrity that has become woven into the fabric of our national character’
(Elias C. Chipimo Jr.)
In recent years, an impressive number of biographical works have appeared on the Zambian market. Though very different from one another, all of these works – written by the likes of John Mwanakatwe, Andrew Sardanis, Simon Zukas, Valentine Musakanya, Robinson Nabulyato, and others – are partly animated by the ambition to provide insights into the origins of the economic and social decline that characterized Zambian history from the early 1970s onwards. The theme of ‘what went wrong with Zambia’ is also taken up by Elias Chipimo Jr. However, unlike the above-mentioned authors, Chipimo has an open political agenda. For in Unequal to the Task? the discussion of the country’s (and the author’s own) troubled past serves as a prelude to – and justification for – the launch of a new political party, the evocatively named National Restoration Party.
As he explains in the book, Chipimo’s literary and political engagement was sparked by life-changing, dramatic personal circumstances. In particular, it was the author’s mother’s death and the hospitalization of his father in the UTH following a car accident near Mpika in 2008 that brought home to him the realization that ‘we have accepted abnormal things as being normal until finally, mediocrity and neglect have become widely and comprehensively accepted, whilst corruption and greed have been endorsed as the basis on which we should conduct our public and private lives.’
Born in September 1965, Elias, the third boy in a family of seven, grew up in Lusaka, but also lived in the United Kingdom, where his father served as a diplomat in the late 1960s. Of particular interest to historians of post-colonial Zambia will be Chipimo’s account of his father’s confrontation with the leadership of UNIP in 1980. Kaunda’s furious reaction to the criticisms implicit in Chipimo Sr.’s speech to the Law Association of Zambia had a lasting impact on the family’s standing and fortunes. Indeed, ‘falling out of favour with a head of state in a nation where political leaders are central to many careers can generate an incredible sense of loneliness and despondency.’ While admiring early nationalist leaders for what he describes as their commitment and sacrifice – an attribute that forms part of the moral and political ‘restoration’ that he advocates – Chipimo is no apologist for UNIP. On the contrary, he presents the introduction of the One Party state in 1972-73 as coinciding with the end of ‘independent’ thinking and the beginning of a culture of loyalty politics.
A large section of the autobiography seems primarily intended to demonstrate the author’s credentials for leadership, including the lessons he admits to have learned from past failures. Chipimo thus describes his educational background in some detail. After completing a law degree at UNZA, Elias got a Rhodes scholarship to study Civil Law at Oxford University. This section is followed by a description of his professional career. On his return to Zambia in 1992, he landed a job at Cavmont Bank and, together with Lucy Sichone, set up the Zambia Civic Education Association with the aim of ‘to help everyone remember who the masters [the people] were supposed to be and who the servants [the politicians] really were.’ In 1995, Chipimo inaugurated his own corporate law firm, Corpus Globe. He had realized there would be ample opportunities to provide legal advice to multinational companies which had entered – or were entering – Zambia as a result of the liberalization of the economy under the MMD.
The kernel – and, in all probability, the principal raison d’être – of the book is to be found in the last section: ‘State of the Nation and the challenges ahead’. After examining the record of the MMD regime and its privatisation programme, Chipimo concludes that ‘we were unequal to the task of building the nation beyond the infrastructure developments achieved in the early Kaunda days.’ In Chipimo’s analysis, five key factors have hindered progress in Zambia: ‘poor time keeping, lack of commitment to one’s word, limited vision and insufficient planning, emotion-driven rather than fact-based decision making and a strong sense of dependency.’ ‘Vision 3:3:8’ is Chipimo’s formula to rebuild the Zambian political system. This cryptic slogan alludes to 3 desirable outcomes (Zambia as an energy superpower, the continental centre for major agricultural production and the leading inland infrastructure and logistics hub), built upon 3 pillars (governance, energy independence and modernization) supported by 8 core values (excellence, integrity, responsibility, service, equity, humility, commitment and a sense of community). These ideas form the backcloth against which to judge the launch of the National Restoration Party on 2 March 2010, a party which, in the words of its main animator, seeks to (re)introduce an ‘era of service and sacrifice.’
Chipomo’s book, well-written and filled with fine analogies, reads like motivational literature, and a good one at that. This biographical work is clearly informed by the author’s profound desire to explain his current actions and to inspire others to follow. Like any autobiography, it suffers from a number of omissions; this reviewer, for instance, would have hoped to gain more specific insights into his experience as a corporate lawyer in the 1990s. Political scientists such as van de Walle have pondered over the popularity of autobiographies and Curriculum Vitae as campaign tools. The account of a given leader’s personal achievements – they explain – may well serve to disguise programmatic uncertainties or the absence of clear ideological foundations. The future will tell us whether these characterizations also apply to Chipimo and the NAREP. 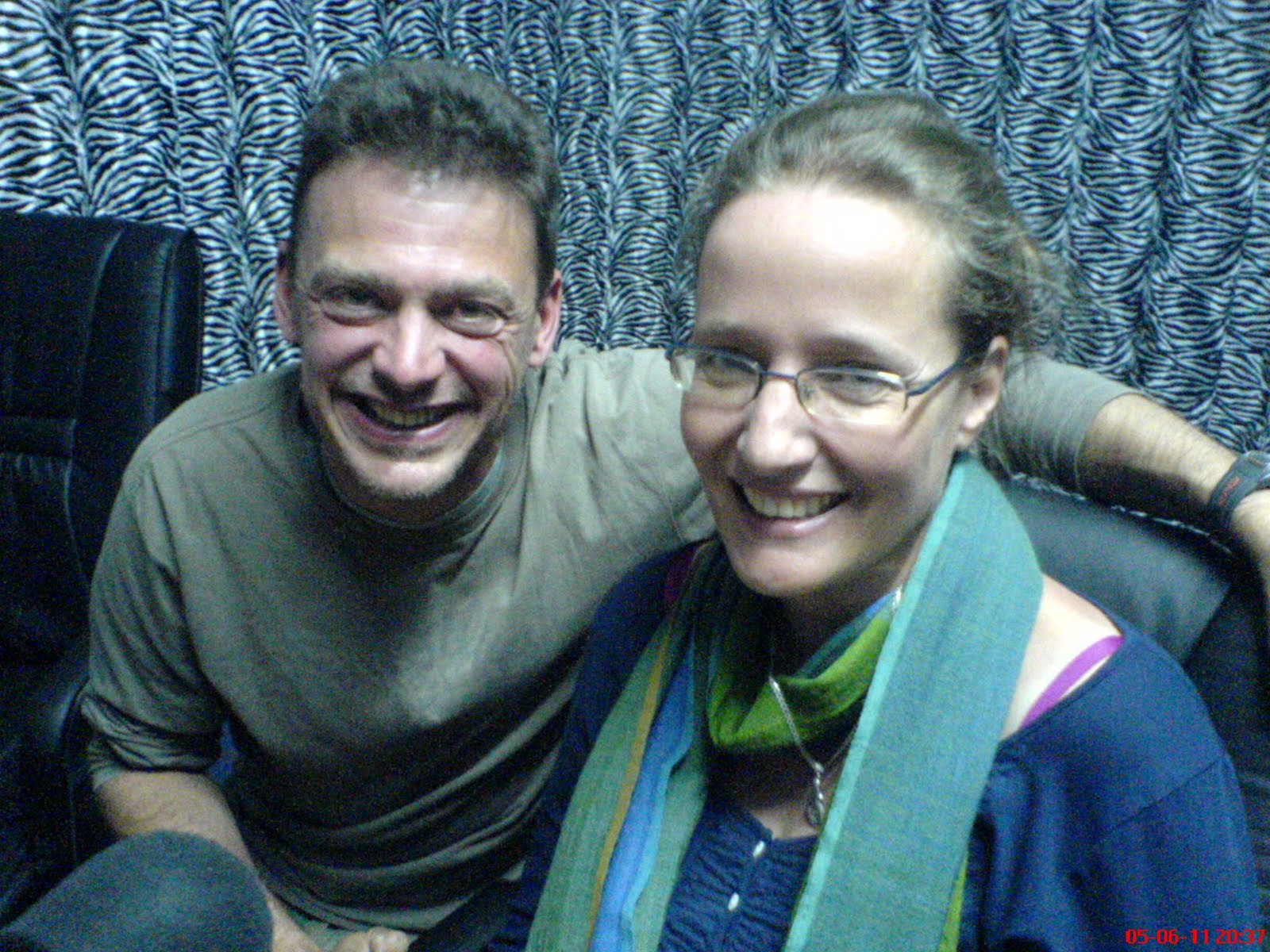 Meet Marja Hinfelaar, pictured above with family friend Frobert Van Zijl (no, that’s not a typo, his name is Frobert!). Marja, an Historian with National Archives of Zambia and a regular Guest at Chanters Lodge, Livingstone, was in town with Frobert, his wife Karyn and their two boys for a weekend visit, so naturally we invited her to guest on The Chanters Lodge Experience with the Milli Jam Ingredient featuring George da Soulchild!

For the uninitiated that’s our weekly Sunday night radio show airing between 20.30 and 21.30 hours on Zambezi 107.7fm, Livingstone’s leading local radio station broadcasting in a range of 70kms around Southern Province, taking in Victoria Falls, Zimbabwe and the Botswana border as well. The show’s a great mixture of music and chat also featuring international and local chart news, as well as stories from Lodgeblog and a regular prize of a dinner for 2 with drinks at Chanters Lodge, ensuring the show’s popularity in town and around!

Marja told listeners that she’s a Dutch national and had been in Zambia since 1997 but in fact her first visit to this country was in 1990 when her uncle was a catholic priest in Lusaka. She has a Phd in African History from University of Utrecht in the Netherlands. (“Dr Hinfelaar? We hadn’t been told!” I offered). Milli Jam asked Marja about her work with the Livingstone Museum and she told listeners that the museum’s clock tower was now open as an additional gallery. Her new project would involve digitally recording all the highly valuable 19th Century documents including David Livingstone’s letters so that the originals could be removed to safe storage, meaning visitors would still able to peruse the records on computer. This would entail Marja resuming her regular monthly visits to Livingstone. This made us happy!

The music on the show was great. We opened with Enrique Iglesias featuring Usher, Lil Wayne and Nayer and their smash hit ‘Dirty Dancer’ which we played back to back with Gyptian’s latest ‘Let Me In’. Our Zambian tracks plugged Slap Dee’s ‘I Wanna Lose Myself’ coupled with XBoy’s ‘Malita’. (XBoy’s from Livingstone and a regular listener to the show). Milli Jam chose ‘Take Off’ by Chipmunk featuring TreySongz and Bobby V’s ‘Altered Ego’ featuring 50 Cent. Wow! We moved on to Beyonce’s latest ‘Best Thing I Never Had’ back to back with Akon’s ‘Can You Believe’ and closed with Alexandra Stan’s ‘Mr Saxobeat’. All the hits!

We asked Marja and Frobert about their activities while they’d been in Livingstone and Marja told listeners that Frobert and his family had enjoyed their one day safari to Chobe. She hadn’t accompanied them as she didn’t care much for elephants! However, she’d joined them for a game drive in Mosi-o-Tunya National Park and the whole family were delighted that they’d been able to get up really close to the rhino. Of course they’d been to see Victoria Falls and got drenched in the process – as you do at this time of year!

Marja told listeners about a new journal called The Bulletin and The Record published monthly in Lusaka of which she’s an editor and which takes an in-depth look at topical Zambian issues. When asked about her private life she told us she was ‘separated but dating’. ‘Fair enough’ we said! She told listeners that they’d travelled from Lusaka by Proflight on Friday and that the plane had been exactly on time. They were leaving the next day with the same airline.

We gave listeners the chart and blog news, greeted guests and staff at the lodge and gave away a dinner for two to the first person to text us Marja’s country of origin. Good response! Great show!