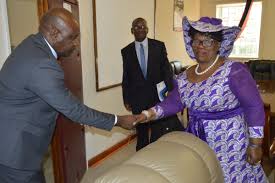 With a predicted two-horse race between PF’s ECL and HH or Hakainde Hichilema of the United Party for National Development (UPND), the PF through Media Director Sunday Chanda is hosting a series of Interactive Forums, bragging that the green team is destined to continue in office as articulated in the 2021-2026 Manifesto.

Professor Lou speaking during the question and answer session during the Patriotic  media forum at Chrisma hotel as she responded to Kwilanzi News Zambia who wanted to know if there are prospects of  reviving Serioes clothing which was once globally acclaimed .

“Our manifesto depicts a culture of diversification, moving from cultivating maize as the mainstay of agriculture to making innovations encouraging formation of cooperatives, coalescing people with different ideas. If you look at China and Japan, their development is founded on cooperatives,” Professor Luo explained on Sunday 25th April 2021.

Without elaborating in specific terms, Professor Luo protested that she had not elaborated cultivation of cotton in depth but the PF Manifesto  is determined to ensure that peasant farmers rolled earn commensurate income throughout Zambia’s ten provinces; Central, Copperbelt, Eastern, Luapula, Lusaka, Muchinga, Northern, North-Western, Southern and Western.

“We are determined to attain diversification of the agriculture sector , as it is more sustainable than mining, which is a wasting and diminishing natural resource. We believe investment in agriculture will improve the domestic economy, through exports and foreign exchange earnings will ultimately strengthen the local Zambian Kwacha currency,” said Prof. Luo in response to a Zambian Developmental Media Alliance (ZADEMA) prayer seeking resuscitation of Serioes International Clothing Company, partnership with the Germany.

Prof. Lou served in the MMD government as Health Minister and lately as Local Government Minister said Zambia is blessed with many water bodies as 60% percent is strategically linked to the rest of the region for exports.

Luckily, on Tuesday August 2nd, 2016, during the Import Substitution Industrialisation (ISI) of the 1960s through to the 80s, the sub sector received substantial Government support enabling it to become the biggest contributor to the country’s Gross Domestic Product (GDP).

In this period, Ndola and Livingstone together hosted more than 130 textiles and garment manufacturing companies.

Further, companies like Serioes International in Luanshya, Mulungushi Textiles in Kabwe and Kafue Textiles of Zambia (KTZ) in Kafue were household names.