Evangelist Sam Majoni who gave the engagement as a surprise gift to his congregants and his fiancee Keuka, who is not a congregant to the church but was invited for the Sunday service.

The Evangelist told the over 1000 seating capacity church that he was calling it quits because of the slander and malice which he had followed him over the years.

He said it is not fair that people should be accusing him of all sorts of things that they could not substantiate.

“I am quitting, this is too much. I want to bless you, are there any elders that I should bless before I quit, I am tired,” he said.

There was dead silence as the people listened to the preacher.

People began to murmur and grumble in disbelief as they heard him say that he is quitting.

Some of the people in the audience stated that it is unacceptable that the man of God could quit.

He repeated his message and said the embargo has been lifted on the people in the church as God will bless his people and with the rising of Jesus Christ as God would do exploits.

“I am quitting being a bachelor from today,” he said and the congregants went into a frenzy with ululation, accompanied by drumming as well as dancing to the good news that they had received.

He said they should pray so that the woman, whom  he wants to engage with should not refuse his engagement proposal as it was a surprise.

Keuka later walked into the church elegantly amidst jubilation and was called to come straight to the Altar where the Evangelist was standing and immediately the man of God went on his knees to propose to his fiancee and she said yes.

However, pastor Sam Majoni has proved his doubters and critics wrong who accused him of using spiritual powers derived from his bachelorhood.

Pastor Majoni has come under heavy criticism from various sections of society and social media platforms who have likened his spiritual powers to being gotten from his unmarried status.

The clergy man laments that the criticism has greatly affected his gospel ministry hence leading him to prove doubters that his spiritual gift is not based on him being a bachelor.

Is this a moment of proving doubters that the growth of his church in Livingstone and spiritual power not based on his bachelorhood after all but God given, it is now left to his perceived critics to judge. 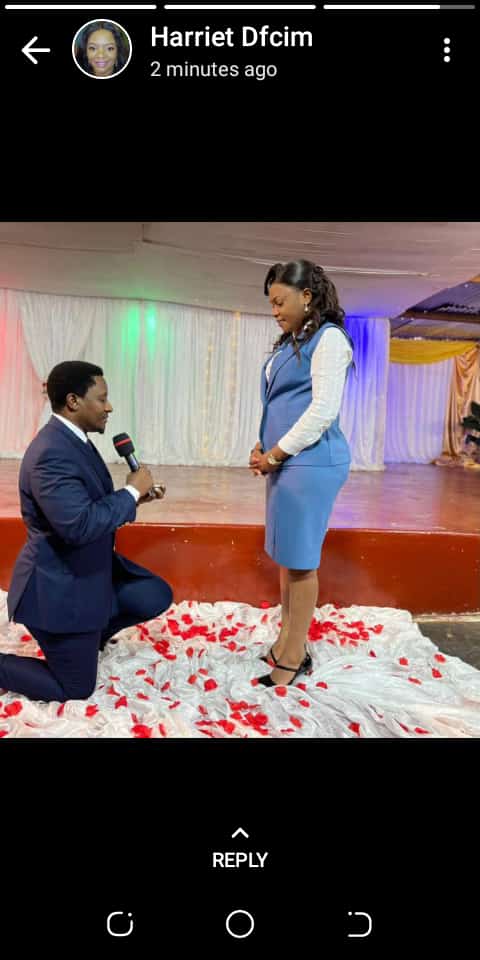 This e-mail and any attachment are confidential and contain

proprietary information, some or all of which may be legally

privileged. It is intended solely for the use of the individual or

entity to which it is addressed. If you are not the intended

recipient, please notify the author immediately by telephone or by

replying to this e-mail, and then delete all copies of the e-mail on

your system. If you are not the intended recipient, you must not use,

disclose, distribute, copy, print or rely on this e-mail.