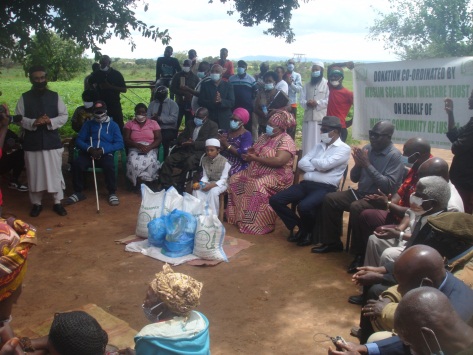 Mrs. Mwamba assured Child Fund Country Director Simba Machingaidze as she paid a courtesy at the CDSS ministerial office pointing out that a Champion for Children’s rights figure will increase visibility of interventions beings implemented to protect young people.

Mr. Machingaidze and Programme Director Doris Chirwa expressed concern that for some time now, Zambia has had no notable public figure to actively champion the rights of children.

Machingaidze said a Champion figure would play a significant role in advocating for children’s rights and soliciting support for children’s programmes.

“There is need for a Champion for children’s issues and it must be a public figure at high level like the First Lady, someone who will be able to articulate issues affecting children in Zambia and seek solutions,” Mr. Machingaidze said.

“We have various programmes such as mobilizing communities, advocacy and sensitization among others. We work in different communities across the country and our work is to connect children with people and resources, also ensure that they have what they need. We work with partners, including Government and children themselves,” said Machingaidze.

And Minister Mwamba said a pronouncement would soon be made regarding Champion for children’s rights figure.

Mwamba said her Ministry was taking the lead in addressing issues affecting children in Zambia, stressing that children deserve to be protected to secure a sustainable future.

“This is why we have pushed and worked hard to take the Children’s Code Bill further. The Bill has provisions that will ensure that children are protect, child abuse, early marriage, child labour and any other violence against children will be a thing of the past,” said Mwamba said the COMMUNITY Development and Social Services Ministry  will continue engaging with partners, in improving the welfare of children in Zambia.