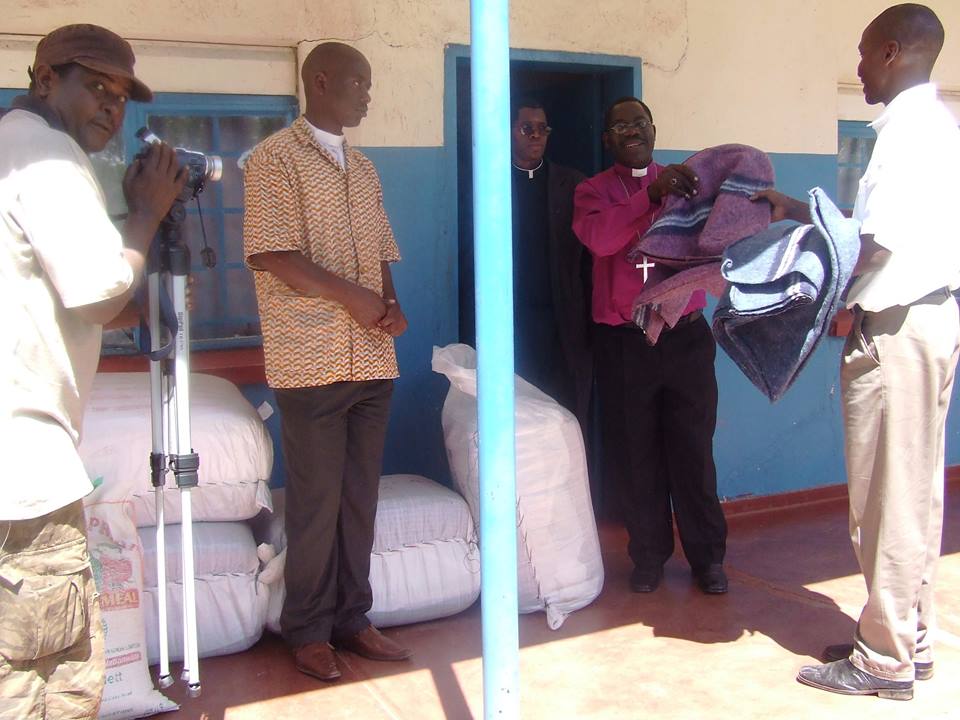 THE Anglican Diocese of Lusaka has received commendation from the Zambian government for being the first organisation to offer spiritual and material support to follow victims in Sinazongwe District.

Making the commendation, Sinazongwe District Administrative Officer (DAO), Sokoloka Daka, expressed delight that the Anglican Church was not just the first organisation but more importantly taken the frontline among ecumenical bodies offering comfort to over 3,500 households affected by the heavy downpour of rain.

Daka praised Anglican Diocesan Bishop, Right Reverend David Njovu for coming forth with the 319 by 25 Kilogrammes bags of mealie meal and 175 bags of maize in aid of the victims whose 1,500 hectares of agricultural fields and close to 500 livestock had been washed away.

Said an elated Daka: “We are elated that the Anglican Diocese of Lusaka has come to our aid to offer support in form of blankets and mealie meal, which we feel will go a long way in ameliorating the plight of flood victims. We are really grateful to you, especially that this is the first support we are receiving as a district.”

“We are certain that the 319 bags of mealie meal and the 175 blankets provided by the Anglican Diocese of Lusaka will ease the plight of flood victims,” said Daka, adding that the Zambian government had earlier provided K20 million the bulk of which was used to carry out an assessment on the impact of the floods.

Presenting the relief support, Bishop Njovu said the blankets and mealie meal valued at K8 million were sourced through financial resources provided by the Episcopal Relief and Development (ERD), United States of America (USA) and the Diocese of Bath and Wells in the United Kingdom.

“On behalf of our partners, the Episcopal Relief and Development of America and our link parishes in the Diocese of Bath and Wells in the United Kingdom who have jointly made this donation possible, we wish to happily hand over the items to you for eventual distribution to residents in Sinazongwe District. We pray that these donations will bring happiness and solace to the affected people. We pray God shall keep them safe from any dangers which may befall them,” said Bishop Njovu.

Bishop Njovu expressed sadness that the flood had caused so much suffering making people homeless and endangering sustainable development projects in Sinazongwe District.

Added Bishop Njovu: “We come here to share with you the plight which the flood victims have been undergoing in Sinazongwe District. The floods have caused so much misery among the people in almost all areas of Zambia and have brought so much suffering with houses being washed away, making roads impassable, flooding agricultural fields which in turn has made people to live without access to basic food and shelter.” Programmes Officer, Mrs. Constance Njovu witnessed the handover ceremony of blankets and mealie meal.

Turning to the current mitigation efforts, Bishop Njovu applauded the Zambian government for speedily responding to easing the socio-economic burden in Sinazongwe District.