The former president, 58, was spotted paddleboarding on Thursday as he continued his vacation in his home state. As he balanced on the water, Obama wore a pair of dark-colored swim trunks.

Later on Thursday, Obama and his wife Michelle enjoyed a night out at local restaurant Ya-Ya’s Chophouse and Seafood.

“Our chophouse just got a whole lot more presidential,” the restaurant wrote on Instagram Friday alongside a smiling group photo. “Last night, we were incredibly honored to welcome @barackobama and his family into our restaurant where he dined on Chef Bo’s famous dishes! Mr. President, you will ALWAYS have a seat at our table. #ComeBackSoon”

Guests at the dinner also included Obama’s sister Maya Soetoro-Ng and her family, but did not include the former president’s daughters Malia and Sasha, who are no longer in Hawaii, Hawaii News Now reported. 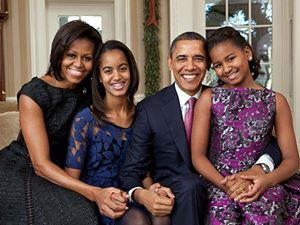 RELATED: The Obamas Celebrate the Holidays with Christmas Card: ‘Let’s Continue Working to Become Even Better’

The former first lady recently opened up to PEOPLE about the readjustment period they needed to get used to living alone again after dropping their youngest daughter Sasha, 18, off at college last year.

“We’ve rediscovered all these little pockets of time, just me and Barack, that for a couple decades have been filled with school events or sports practices,” Mrs. Obama, 55, said last month. “We’re taking full advantage of this new normal, simply spending time with each other and remembering what brought us together in the first place.”

During a Q&A session in Malaysia in mid-December, during the couple’s multi-country trip to Asia with the Obama Foundation, the former president touched on how he balances spending time with his family while also being one of the most powerful figures in the world.

“We took action last night to stop a war,” Trump told reporters on Friday. “We did not take action to start a war.”

Iranian leaders responded to the U.S. attack with promises of “revenge” and threats of retaliation.

Obama has yet to comment on the airstrike. https://youtu.be/fp85zRg2cwg/