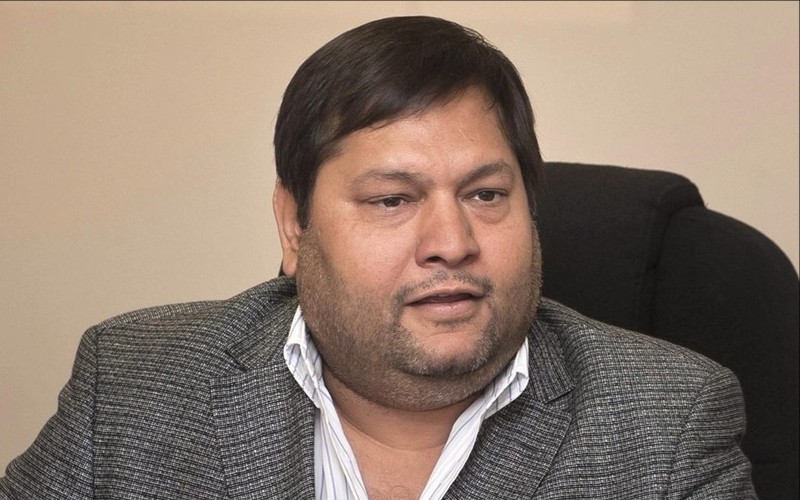 The three brothers, accused by the public anti-graft watchdog of using their friendship with Zuma to influence policy and amass wealth, have denied any wrongdoing, as has Zuma.

Ajay Gupta was declared “a fugitive from justice” by South Africa’s chief prosecutor this week after he failed to report to police investigating allegations that millions of dollars of public money intended for a state-backed dairy project were siphoned off.

Leigh Gunkel-Keuler, a spokeswoman for Johannesburg’s main airport, said Ajay Gupta was on an Emirates flight bound for Dubai on Feb. 6 at 8.30 p.m. local time (1830 GMT).

A spokesman for the elite Hawks police unit that targets organized crime and corruption said it had made contact with the Gupta family’s lawyers but not yet located Ajay. He said police were only searching for Ajay, not his brothers Atul or Rajesh, contrary to some domestic media reports.

A lawyer who used to represent the Guptas told Reuters his mandate to work for the family had recently been suspended. Other lawyers authorized to speak for the Guptas could not immediately be located for comment.

South Africa has no extradition treaty with the United Arab Emirates (UAE), where Dubai is located and this could complicate South African authorities’ efforts to question Ajay Gupta – if he remained in the Gulf state.

A spokesman for the UAE embassy in South Africa was not available for comment.

Gunkel-Keuler said the airport would hand over all relevant information to the Hawks, which are formally known as the Directorate for Priority Crime Investigation.

Earlier this week the Hawks raided Gupta properties as part of investigations into the dairy farm in the Free State province. The farm was meant to benefit the local community but prosecutors described it as a “scheme designed to defraud and steal”.

After the raids, eight people, several of whom have worked for Gupta firms, appeared in a South African court on charges including fraud.

Among the eight were Gupta nephew Varun Gupta, who was an executive director of the Guptas’ Shiva Uranium firm. Zuma’s son Duduzane was also a director at Shiva Uranium.

The main opposition party, the Democratic Alliance, wants the dairy project inquiry widened to include Mining Minister Mosebenzi Zwane, an ally of Zuma who worked at the Free State’s agriculture department when the farm funds were diverted.

A spokeswoman for Zwane did not answer her phone on Friday. Zwane has denied wrongdoing when asked about the project.

Relations between the Guptas and Zuma, who resigned on Wednesday after being instructed to do so by the ruling African National Congress, are the focus of a separate judicial inquiry into high-level state corruption.

A top judge will investigate whether the Guptas sought to influence the appointment of cabinet ministers and were unlawfully awarded state tenders. Zuma’s spokesman did not respond to a request for comment.

South Africa’s new president, Cyril Ramaphosa, has made fighting corruption a top priority. He has said that police and prosecutors should be strengthened in the fight to root out graft.

ADDIS ABABA (Reuters) – Ethiopia’s ruling coalition has lost its authority and all parties must help map the country’s future, an opposition leader said on Friday, suggesting political tensions in Africa’s second most populous country are unlikely to ease soon.

Mulatu Gemechu, deputy secretary of the opposition Oromo Federalist Congress, spoke a day after the surprise resignation of Prime Minister Hailemariam Desalegn, who said he was leaving office to smooth reforms.

Mulatu said Ethiopia needed a completely new political system after years of political unrest in the two most populous regions of the Horn of Africa country. “Ethiopians now need a government that respects their rights, not one that keeps beating and killing them,” he told Reuters.

Pressure on the ruling coalition, in power since 1991, began building in 2015 when protests against an urban development plan for the capital Addis Ababa sparked larger demonstrations demanding more freedom and civil rights.

More than 6,000 political prisoners have been freed since January as the government struggles to placate simmering anger among the two largest ethnic groups, the Oromo and Amharic, who complain they are under-represented in the corridors of power.

For a factbox on Ethiopia’s main ethnic groups, click on

A wave of strikes and demonstrations hit towns near Addis Ababa this week as protesters successfully pressed demands for jailed opposition leaders to be released. On Friday, the U.S. embassy suspended travel outside the capital for its staff.

The Oromo Federalist Congress is one of seven parties that make up the biggest opposition coalition, MEDREK.

Mulatu’s views were echoed in the Oromo heartlands of central Ethiopia, the site of a series of violent protests against Hailemariam’s government in 2015 and 2016.

“Our land can’t continue being taken from us. Oromos should not be jailed for exercising their rights,” said Dinkissa, a university student in Ambo, a town in the region.

“Oromos have been always mistreated. His (the prime minister‘s) resignation will not mean anything unless our rights are respected. Whoever comes to power should know that. Otherwise, we will not stop protesting.”

The government has also grappled with several armed groups in the past decade, some of which it has designated as terrorists.

Among them are the Ogaden National Liberation Front (ONLF), which has fought the government since 1994 and draws support from some of the country’s ethnic Somali population. Somalia and Ethiopia share a long and porous border.

This week the ONLF and Ethiopian authorities held private talks in Nairobi, an observer present at the discussions told Reuters on condition of anonymity.

A tentative accord was reached on a ceasefire, prisoner releases, boundaries between the Somali and Oromiya regions of Ethiopia, and economic development, the observer said. But a final deal was not signed since the ONLF wanted a signatory from Ethiopia’s central government, rather than the head of the Somali region, who represented the government at the talks.