A new inter-agency study released today found a correlation between prolonged droughts in El Salvador, Guatemala and Honduras – exacerbated by El Niño phenomenon from 2014 to 2016 – and the increase in irregular migration from these countries to the United States, the United Nations food relief agency reported.

“The study provides an important insight into why people flee and the impact on the family members staying behind,” said World Food Programme (WFP) Regional Director for Latin America and the Caribbean, Miguel Barreto.

“It is perhaps this second aspect which makes this study stand out from much of the analysis conducted on migration from El Salvador, Guatemala, and Honduras to date,” he added.

Food Security and Emigration shows the need to invest in long-term programmes to discourage people in the Dry Corridor from emigrating, and to reduce the risks for emigrants and the impact on the families left behind.

The study indicates that a trend of younger and more vulnerable people are leaving food-insecure areas – especially in the Dry Corridor, a drought-prone area that crosses these countries.

Family members left behind face the burden of paying the debts of those who have migrated. If the emigration is unsuccessful, the family faces the problem of growing debt and of how to meet their food needs, the report said.

The document also pointed out that 47 per cent of the families interviewed were food- insecure, noting that these levels have never been previously recorded in the region even in assessments carried out over the past three years in the Dry Corridor. 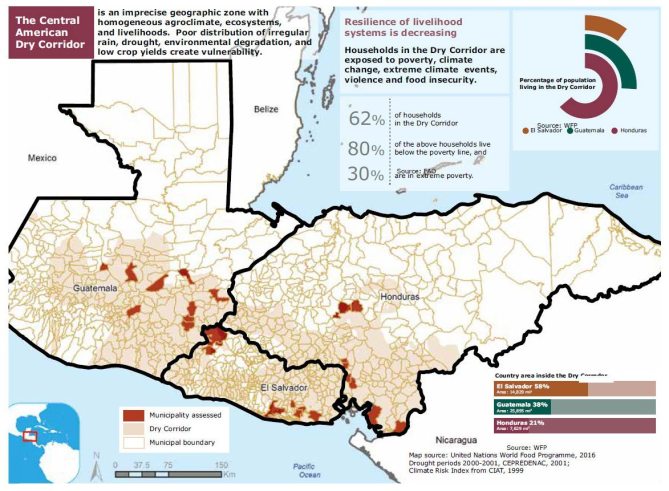 Source: FOOD SECURITY AND EMIGRATION – Why people flee and the impact on family members left behind in El Salvador, Guatemala and Honduras.

Additionally, some 72 per cent of the families interviewed said they were applying “emergency” coping strategies, such as selling their land, farm animals and tools to buy food.

Meanwhile, the study reveals that in the cases of successful emigration, per cent of households in the home country receive monthly remittances, of which 42 per cent indicate that remittances are their only source of income.”

Indeed, more than half of the money received from emigrants is used by family members to buy food, followed by agricultural investments – like buying land and animals – and investing in small businesses.

The research is a follow-up to the results and recommendations of the 2015 exploratory study on the links between migration, violence and food security, Hunger without Borders.