HH is winning 2021 elections, …Change is a must, predicts Guy Lindsay Scott …as Hakainde Hichilema and Edgar Chagwa Lungu fight on twitter 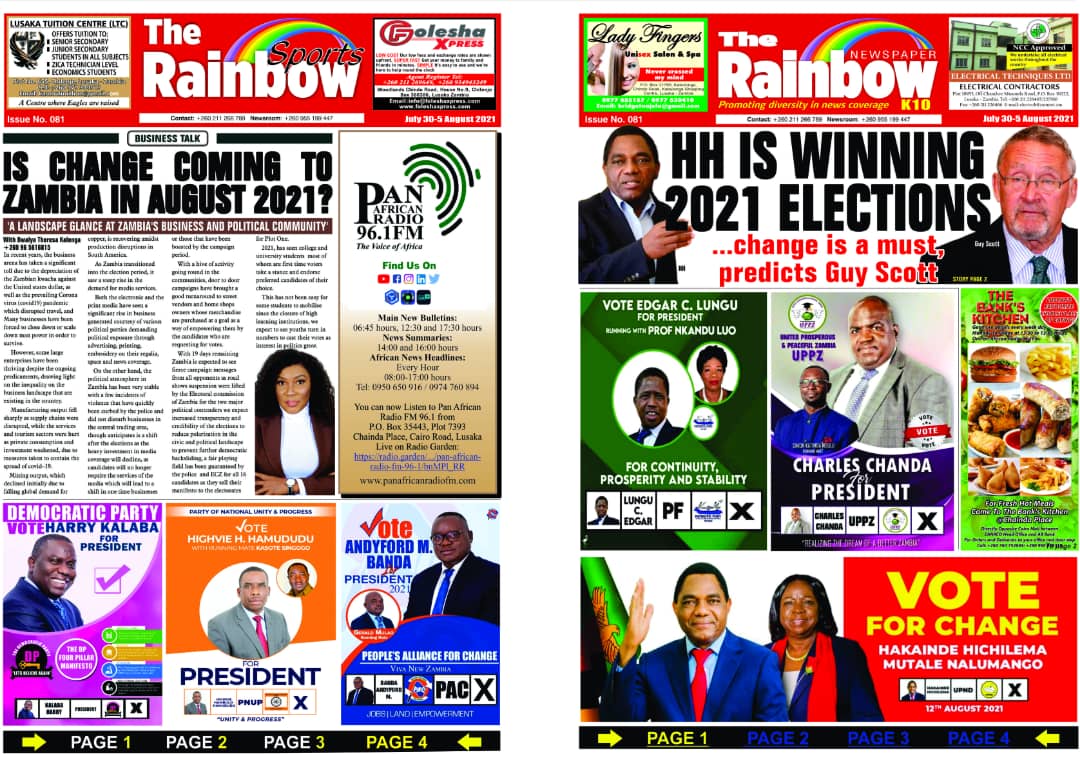 …Change is a must, predicts Guy Lindsay Scott

…as Hakainde Hichilema and Edgar Chagwa Lungu fight on twitter

Formerly Republican Vice President, Dr. Scott told UPND Chairperson for Elections and Campaigns: “Regime change in this year’s general election is a must to prevent the country from being submerged in the inept leadership of the Patriotic Front (PF).

Zambians must turn out in huge numbers to usher in Hakainde Hichilema and the UPND to State House and Government”.

An HH twit read: “We said it, that confidence in the market will make the Kwacha appreciate. Independent opinion polls have reported a likely UPND victory, and the markets are already responding. Let’s continue campaigning colleagues. It will get better”!
While ECL equally twitted: “I’m happy with the efforts of my government, whose fiscal and monetary policies have ensured that our currency gets back on a positive trajectory amidst the Coronavirus (Covid-19) pandemic. The Kwacha is now trading below K21 per dollar, closing at K20.7 per dollar on Friday 23rd July 2021”.

Wrote ECL on Facebook: “It has not been easy to get back on track as Covid-19 disrupted businesses across the globe. Zambia will continue being a favourable investment destination for Foreign Direct Investments (FDI’s). My government is rolling out a 24-hour economy which shall ensure a much stronger and resilient economic environment for our country. Happy weekend”!

Victor Mwale said: “Gary Nkombo, Cornelius Mweetwa , Douglas Siakalima and Jack Mwiimbu, you people should not have re-contested in your respective constituencies. You should have been on the group helping HH now moving around different provinces. HH is just alone with his running mate, Reverend Witner Kapembwa Mutale-Nalumango”.

Concurred Siba Kachuzu: “Honestly, Garry Nkombo is good at talking in Parliament, not in campaigns. The guy is not doing enough to put HH in the office. The problem these guys (Nkombo,Mwetwa and Mwimbu)”.
Moses Sakatende said: “10 years for PF is enough we to vote for new leaders who will bring new ideas which will make the country to move forward”.

Miyoba C. Mate explained: “This person sweated for PF sure just forgotten like this, he invested his… with English Lesson saying: “I miss Dr. Scott. It’s sad that the PF used racism to derail him from being president”.

Wilson Mwape backed Facebook peers: “Dr. Scott is worthy to be the Chief Advisor. He is an expert in the political space”.

Said Mecius Ngwema: “From the very beginning, Dr Scott rejected Edgar Chagwa Lungu and now Zambians have now seen what Dr Scott saw in ECL that the man cannot rule and now is leaving us in huge debts and has no respect for the law”.

Chanda Chanda recollected: “The rivalry that was characterised at the time of succession to the Patriotic Front (PF) presidency has not settled and will never settle down”.

But Richard Mukuka advised: “My humble advice to former VP is that us Zambians loves you. Enjoy your money, wait for a very good burial like KK (Zambia’s former First Republican President, Dr. Kenneth David Buchizya Kaunda, who died on Thursday, 17th June, 2021. Those are following you to destroy your name”.

Manunga Tonkanya said: “Why is Honourable Nkombo not heard at this critical moment when campaigns are in high gear,as Chibuta Chengelo wrote: “Mr. Guy Scott, you really inspired me a lot since I knew you and you are my favourite. My God bless you always”. 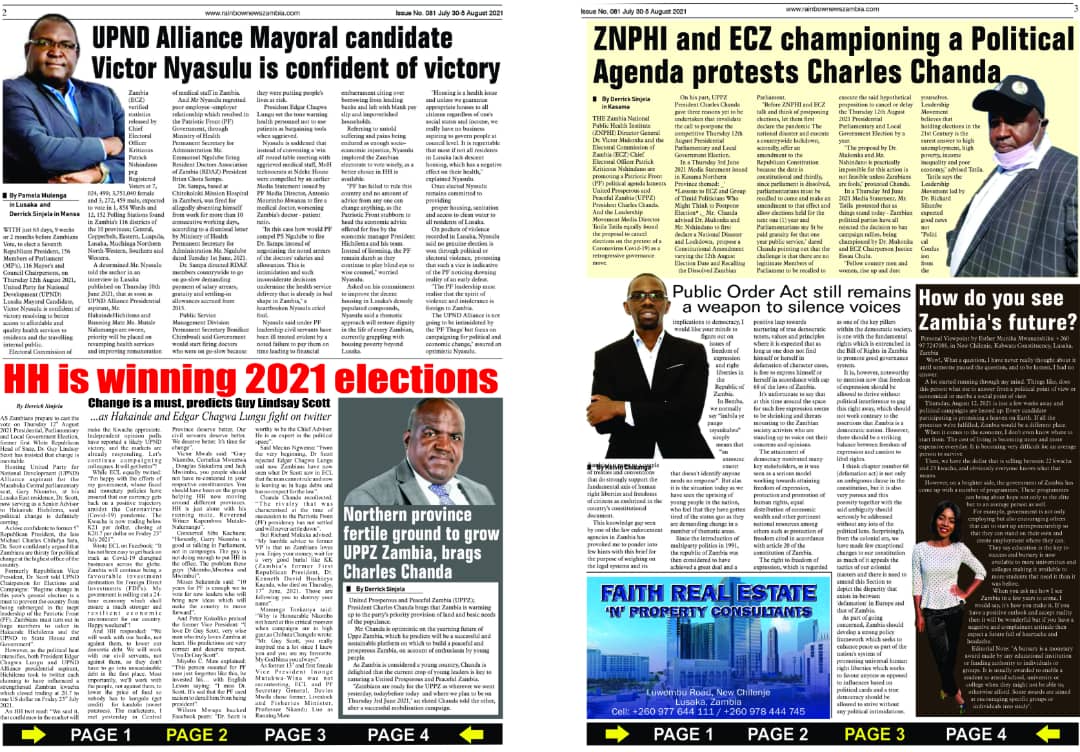 HH is winning 2021 elections,
…Change is a must, predicts Guy Lindsay Scott
…as Hakainde Hichilema and Edgar Chagwa Lungu fight on twitter