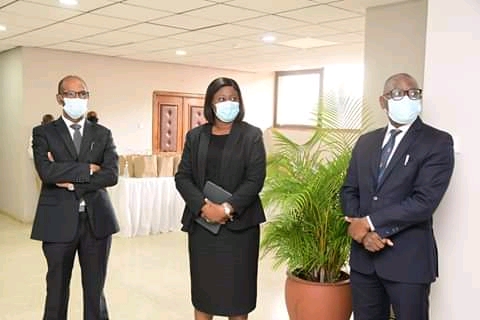 Franked by BoZ Deputy Governor – Operations Dr. Francis Chipimo and Deputy Governor -Adminstration Ms. Rekha Chifuwe-Mhango, Mvunga reiterated that the adjustment had been necessitated by escalation in inflationary pressures, which are pushing inflation away from the upper bound of the 6-8% target range.

Said an optimistic Mvunga: “The decision balances the need to contain rising inflation and anchor inflation expectations against the efforts made to support financial system stability and growth. Ensuring that inflation remains well anchored in the medium-term is essential to moderate fragilities in the financial sector and support economic recovery. In addition, the implementation of a strong fiscal policy adjustment, whose key parameters are clearly outlined in the Government ‘s Economic Recovery Programme, is critical in restoring macroeconomic stability”.

“The lockdown measures caused severe disruptions to global supply chains and resulted in a slump in consumption and investment spending,” said Mvunga noting that consequently, global real Gross Domestic Price (GDP) is estimated to have shrunk by 3.5%, though a strong rebound to 5.5% in 2021 is projected. 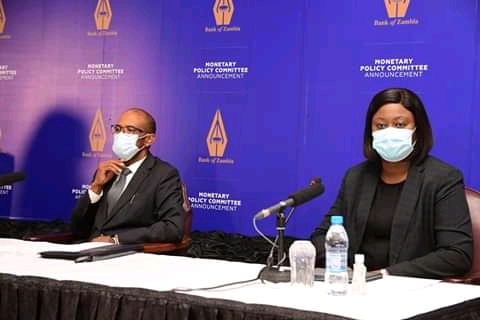 Mvunga says nearly all monitored indicators in the Bank of Zambia Survey of Business Opinions and Expectations, show an improvement over third quarter readings.

“The forecast period or horizon is eight quarters ahead, that is, the first quarter of 2021 to the fourth quarter of 2022. In 2021, and the medium-term, domestic real GDP is projected to recover supported by positive growth in mining, electricity, gas and water as well as information and communication sectors. Uncertainty surrounding the resurgence of covid-19 infections and the narrow fiscal space pose significant downside risks to this growth outlook,” said Mvunga in reference to the January 2021 Stanbic Bank Zambia Purchasing Manager ‘s’ Index.

“This is largely driven by the sustained depreciation of the Kwacha, reduced seasonal supply of some vegetables and the fish ban. Inflation rose to a quarterly average of 17.6% from 15.7% in the preceding quarter. Food inflation averaged 17.2%, up from 15.2% while non-food inflation rose to 18.0% from 16.2%. Inflation increased to 21.5% in January 2021 from 19.2% in December 2020. Over the next eight quarters, inflation is projected to deviate further away from the upper bound of the 6-8% target range due to the lagged pass-through from the depreciation of the Kwacha and sustained high fiscal deficits. The risks to the inflation outlook are assessed to be tilted to the upside. Inflation is bound to accelerate further if crude oil price increases persist, fiscal deficits turn out to be higher than projected and the exchange rate depreciates further. Inflation may be moderated by improved supply of food and subdued aggregate demand as economic growth is likely to remain modest,” said Mvunga.

Mvunga says the overnight interbank rate declined to a quarterly average of 8.06% in the fourth quarter of 2020 from 8.57% and was contained within the Policy Rate Corridor of 7.0% to 9.0% throughout the period.

“This was largely attributed to the accommodative monetary policy measures implemented earlier in the year under review,” argued Mvunga as he pointed out that demand for Government securities weakened as investor appetite had considerably reduced.

Mvunga is euqually worried that Treasury bills and Government bond auctions were undersubscribed with bid amounts falling short of amounts on offer by 20.0% and 70.0%, respectively.

“However, funds raised from the
auctions were adequate to cover maturities resulting in a marginal surplus of K3 billion. Additional securities were issued through private placements mostly to finance the Farmer Input
Support Programme (FISP) and partially clear fuel arrears to suppliers. Consequently, the stock of Government securities rose by 9.7% to Kl 30.2 billion,” said Mvunga .

At end-December 2020, Government securities held by non-residents increased by 30.9% to Kl 8.4 billion, representing 14.1% of the total securities.

Ninety-three percent (93%) of these holdings were in Government bonds.

“The commercial banks’ average lending rate declined to 25.1% in December from 25.7% in September. The savings rate for 180-day deposits also reduced to 9.8% from 10.3%. Similarly, the composite yield rate on Treasury bills declined to 21.2% from 22.7%. The composite Government bond yield rate, however, rose to 32.9% from 32.3%, reflecting weaker demand for longer-dated instruments.
Credit to the private sector moderatesfurther, but money supply continues to expand
Credit to the private sector moderated to 8.5% in December, year-on-year, from 13.8% in September due to strict lending conditions as banks sought to curb elevated credit default risk.
However, credit to Government continued to grow at a strong pace underpinned by issuance of Government securities, particularly for procurement of agricultural inputs under FISP and clearance of fuel arrears to suppliers. This continued to contribute to the sustained strong annual growth in money supply (M3)2, at 46.4%, in December 2020.
Fiscal pressures persist
Fiscal pressures remained high as revenue fell due to the COVID-19 shock amidst rising expenditures especially on agricultural inputs, health and clearance of arrears. Fiscal consolidation remains challenging given the significant uncertainty about the evolution of escalating COVID- 19 infections and the debt restructuring process,” said Mvunga.

Noted Mvunga: “Narrowing the fiscal deficit by ramping up revenue whilst rationalising expenditure, and restructuring of
Government debt remain critical to restoring fiscal and macroeconomic stability. Securing external sector support will be central to this effort. 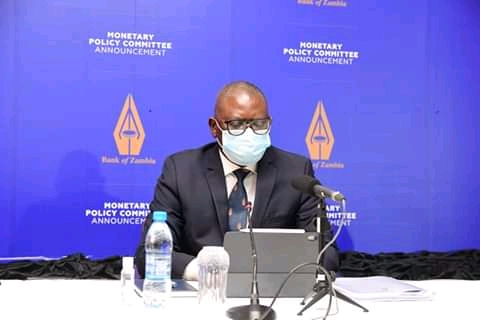 Mvunga reiterated that the balance on goods surplus edged higher by 5.2% to US$I.I billion as the growth in exports outpaced imports.

“Exports rose by 2.7% to US$2.4 billion supported by copper export earnings that rose on account of higher average realised prices and volumes. However, earnings from nontraditional exports, gold and cobalt declined. Merchandise imports rose by 0.5% to US$ 1.4 billion following an increase in consumer and capital goods which more than offset reductions in raw materials and intermediate goods,” said Mvunga.

The BoZ Governor regards the depreciation of the Kwacha now trading at 21.5, accelerates
rising excess demand continued to characterise the foreign exchange market due to higher import requirements for petroleum products and agricultural inputs under FISP. 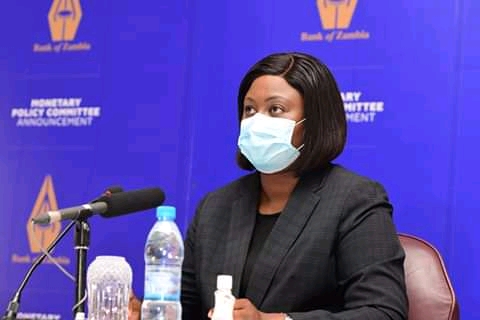 Consequently, Mvunga protested that the Zambia Kwacha weakened against the US dollar by 9.4% to an average of K20.71/US$ in the fourth quarter compared with 3.3% depreciation in the third quarter.

In response, the Bank of Zambia scaled-up interventions to moderate pressure on the exchange rate.

This included receipts of all statutory tax obligations by the mining companies.
Gross international reserves declined by US$117.7 million to US$1.2 billion (equivalent to 2.4 months of import cover) at end-December 2020 from US$ I .3 billion at end-September (equivalent to 2.3 months)3 .

The decline was largely on account of foreign exchange interventions and debt service.

Despite the reduction in the level of reserves, Mvunga says the months of import cover remained broadly unchanged, explained by a further reduction in imports of goods and services following the weakening of the Kwacha.

“The MPC noted the escalation in inflationary pressures which are pushing inflation further away from the upper bound of the 6-8% target range. This is despite aggregate demand remaining
subdued. In the medium-term, growth is expected to recover albeit at a weak pace given the uncertainty surrounding the resurgence of COVID-19 infections and the narrow fiscal space.
The risks to the inflation outlook are assessed to be tilted to the upside. These include persistent increases in crude oil prices, higher than programmed fiscal deficits and a further weakening of the Kwacha against the US dollar,” argued Mr. Mvunga.

Mvunga says the MPC decided to raise the Monetary Policy Rate by 50 basis points to 8.50%, to balance the need to contain rising inflation and anchor inflation expectations against the efforts made to support financial system stability and growth.

“Ensuring that inflation remains well anchored in the medium-term is essential to moderate fragilities in the financial sector and support economic recovery. In addition, the implementation of a strong fiscal policy adjustment, whose key parameters are clearly outlined in the Government’s Economic Recovery Programme, is critical in restoring macroeconomic stability,” advised Mvunga. 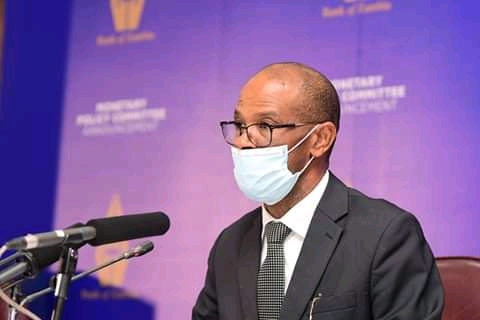 Mvunga says the Bank of Zambia stands ready to adjust the policy rate upwards should inflationary pressures persist, stressing that
decisions on the Policy Rate will be guided by inflation forecasts, outcomes, and identified risks, including those associated with financial stability and the COVID-19 pandemic.

The next Monitary Policy Committee Meeting is scheduled for Monday 17th – Tuesday 18th, 2021.